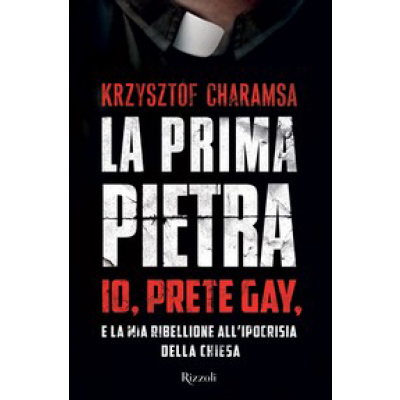 The cornerstone is the first to be placed, when raising a building. It is the most important stone, the one that supports the whole edifice. For this reason, it cannot be any stone; it must be a stone that is sought and chosen carefully, by digging deeply. His coming out, in October 2015, was the first stone, the cornerstone in Krzysztof Charamsa’s life. At a high point in his career as a theologian working at the highest level in the Vatican, he has decided to denounce to the world the hypocrisy of the Catholic Church, an institution which for centuries has used sexuality for the purpose of imposing its power over the people. It does it by spreading unhappiness in people, conditioning them so that they cannot with serenity live this fundamental dimension of their existence. By means of precepts, doctrines and confessions, women are induced to submit themselves to their husbands, while homosexual persons are discriminated against, reduced to the condition of plague victims, reduced to nothing. All this is cloaked in a mantle of hypocrisy because, according to Charamsa, the Catholic clergy, although strongly homophobic, is itself composed largely of homosexuals. Whether repressed, whether imprisoned in secrecy — but either way bound by the unnatural commandment of celibacy — these men of the Church then go to work the fertile ground in which sprout the shameful weeds of pedophilia and other abuses. With 'The first stone', Charamsa intends to shake consciences and to lay the foundations for a renewal in the Catholic Church, an institution in which he wants to believe even today. A Church which, if it wishes to continue to exist as a spiritual guide — as Charamsa wrote, on the day of his coming out, in a letter to Pope Francis which is published here in full for the first time — must finally begin to respect every person in their own sexual orientation, must confront its teachings with what science tells us. The Catholic Church of the future.